In much the same way that the helm enables a pilot to steer a ship, Helm enables a Kubernetes operator to have greater control of his/her Kubernetes cluster. If you are familiar with apt/yum/brew and their role in different Operating Systems then you should already know the importance of a package manager.  Helm is the package manager for the Kubernetes (in this approach, Kubernetes could be considered as an operating system).

Why Does Kubernetes Helm Matter?

Kubernetes can become very complex with all the objects you need to handle ― such as ConfigMaps, services, pods, Persistent Volumes ― in addition to the number of releases you need to manage. These can be managed with Kubernetes Helm, which offers a simple way to package everything into one simple application and advertises what you can configure.

Users can install Helm with one click or configure it to suit their organization’s needs. For example, if you want to package and release version 1.0, making only certain parts configurable, this can be done with Helm. Then with version 2.0, additional parts can be made configurable.

Platform9 automates Kubernetes Helm, making it available in one click with its Managed Kubernetes offering. We also Included Monocular, a UI and a REST API associated with Helm. Once you install our Kubernetes cluster, you can use a UI that included your favorite package (e.g., Redis, Elasticsearch, Mongo, Postgresql). You can search for it, one-click deploy it, or configure it.

Kubernetes Helm fills the need to quickly and reliably provision container applications through easy install, update, and removal. It provides a vehicle for developers to package their applications and share them with the Kubernetes community. It allows software vendors to offer their containerized applications at “the push of a button.” Through a single command or a few mouse clicks, users can install Kubernetes apps for dev-test or production environments.

What are Helm Charts?

When building and deploying applications, Helm Charts provide the ability to leverage Kubernetes packages through the click of a button or single CLI command.

“Helm” refers to both the client-side and server-side Kubernetes components: the Helm client and the Tiller/Helm server. The client interacts with the server to perform changes within a Kubernetes cluster.

When a user executes the Helm install command, a Tiller Server receives the incoming request and installs the appropriate package – which contains the resource definitions to install a Kubernetes application – into the Kubernetes cluster. Referred to as Charts, these packages are similar to RPM and DEB packages for Linux. They provide a convenient way for developers to distribute applications, and for end users to install those applications.

Among more than 100 available online, stable Helm Charts include:

The Helm Solution to Kubernetes’ Challenges

Kubernetes is a powerful tool, however, several challenges can hamper its adoption. With Kubernetes Helm, the following issues can be alleviated:

It can take someone new to Kubernetes-orchestrated container apps a long time to learn how to use it resulting in high lead times to deploy production-grade apps on Kubernetes.

Kubernetes-orchestrated container applications can be complex to deploy. Developers can use incorrect inputs for configuration files or not have the expertise to rollout these apps from YAML templates.

Deploying and maintaining Kubernetes applications ― and their multiple components such as pods, namespaces, RBAC policies, and deployments ― can be tedious and error prone.

By sharing the helm charts within an organization or across organizations, duplicate efforts are avoided leading to higher efficiency and reduced errors.

Can Your Organization Benefit from Kubernetes Helm?

If you’re a developer and you want to package your application as a Kubernetes application, Helm is the way to go. If you are a DevOps person trying to deploy either internal or third-party vendor applications, you should use Helm as your packaging mechanism. 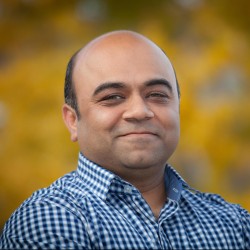 Roopak Parikh
Co-founder and CTO at Platform9
Roopak envisioned the technology powering Platform9, and now leads our Engineering wizards in the quest to realize this vision. Roopak likes to work with customers in designing solutions and solving technical challenges. He also leads incubation projects within the organization and loves talking about everything from latest javascript frameworks to blockchain technologies.

Before co-founding Platform9, Roopak was a technical lead at VMware, where he helped architect and ship major vSphere products: Update Manager and vCloud Director. Before VMware, Roopak was an early engineer at an early stage Mobile computing startup.

Outside of work, Roopak is a fan of audiobooks, likes cooking, following sports, and keeping up with his kids on the soccer field.

EKS gets operations going, but what about your engineers?